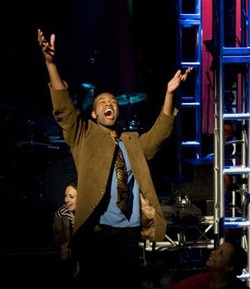 “At the center of “Passing Strange’’ is a young aspiring rock musician, simply called Youth, played by Cheo Bourne with a wide-eyed air of discovery.”  The Boston Globe

“Most enigmatic of them all is the man-boy in the center of it all. Bourne’s performance is beguilingly ageless. He embodies that eruptive time of life when we’re both child and adult, and yet neither. And Bourne and the script never shy away from presenting that most important – and ugliest – tool in the artist’s box: selfishness.”   The Patriot Ledge


“The youth, played by Cheo Bourne, seeks for a larger meaning than his middle-class, suburban existence.  Cheo Bourne brings both an innocence and egoism typical of a young adult.  Unwilling to hear his mother’s pleas, the youth goes off into the world–thinking that the world will provide his raison d’etre. Bourne’s innocence is transformed slowly, but steadily, into painful experience; fortunately is never far from the shadow of the narrator.”  The New England Theatre Geek


“It’s all propelled by two terrific performances at the center its story — Cheo Bourne as our hero as a young man searching for something more than he’ll find in a comfortable suburb of Los Angles, and Cliff Odle playing our hero as an adult recounting his story. “   The Dedham Transcript

“Cheo Bourne, a young actor who’s getting his first shot at a starring role with Ugly, is a wonderful singer and dancer with a strong stage presence. It’s a thrill to see someone of his talent get into the limelight.” Terry Byrne, The Boston Globe

“Cheo Bourne absolutely stole the show as “Ugly”.  Though he played the character a little “young” for my taste, his voice and acting were impeccable.  I couldn’t imagine another person for the role.” Boston Theatre Review

“Aimee Doherty and Cheo Bourne lead the flock.” “As Ugly, Bourne glows with a remarkable, inward resilience, despite the ridicule he receives for his otherness. Boston producers should plan to witness Bourne's commanding song-and-dance performance before casting their shows for next season.” BOSTON: Talking Broadway Regional Reviews by Matthew Small

“Besides handsome, engaging Cheo Bourne, who makes his character’s name, Ugly, a misnomer, and whose melodic tenor and eager sincerity are charismatic” The Theater Mirror, Sheila Barth

“Cheo Bourne is magnificent as the exuberant signet mistaken for a duckling. There are several show stopping numbers in HONK! but Bourne’s gorgeous love song about another swan, “Now I’ve Seen You” will leave you breathless.” The Theater Mirror, Beverly Creasey 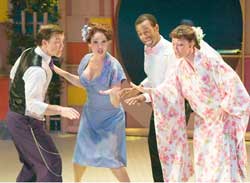 “McCaela Donovan and Cheo Bourne are lovely as the young lovers, Yum-Yum and Nanki-Poo” The Boston Globe, Louise Kennedy

“Possessing two of the fine voices, Cheo Bourne (Nanki-Poo) and McCaela Donovan (Yum-Yum) are an appealing duo as the star-crossed lovers who seem to be foiled at every turn.” BroadwayWorld.com, Nancy Grossman

“Bourne can scat with the best of em’” Boston Herald, Jenna Scherer